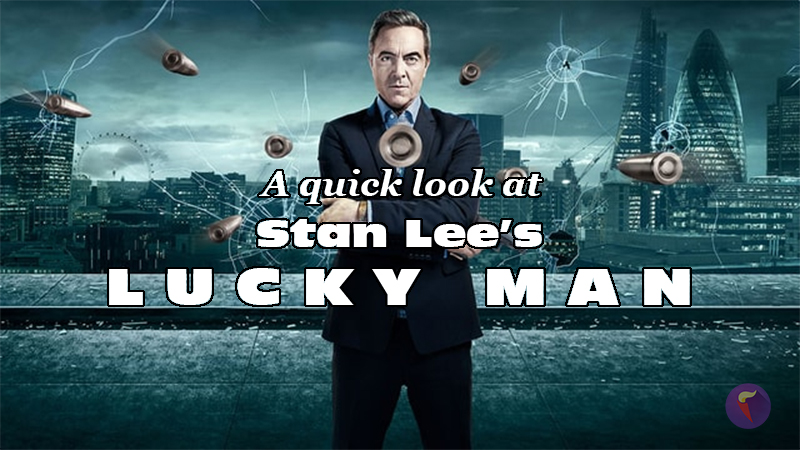 The Man of Marvel, Mr Stan Lee partnered with UK TV channel, Sky One to bring another superhero to our small screens. Detective Inspector Harry Clayton (Played by James Nesbitt) is a man down on his luck. He has a gambling addiction which has cost him his wife and child. Of course, he does and of course, he has because Stan Lee never makes heroes out of men and women who can do no wrong. No way, he must make heroes out of drunks (Tony Stark), power hungry scientists (Reed Richards) and bullied teenagers (Peter Parker). The point is that Harry Clayton is a deeply flawed main protagonist, who, when we are introduced to him, has a huge problem that he needs to overcome. He has already lost everything, the only thing he has left is his job and he struggling to hold on to even that.

So, what do you give a man who is down on his luck, who has run out options and wants nothing more than to gamble his life away. You give him a lucky bracelet. Harry meets the protector of the bracelet, Eve Alexandri (Played by Sienna Gulliory), at a casino and she shows him its power. He doesn’t believe her of course and they proceed to sleep together (a fact that was never brought up again, not even for an awkward morning after moment or when they do eventually meet again) and Harry awakes to find that the bracelet is now on his wrist.

Now, this is what I like about the series, because of course, it is a British show so we know how to use subtlety in a unique way. Harry doesn’t realise that everything is going his way right away. It happens to him, without his knowledge, he does eventually catch on but, it wasn’t until he almost dies that it hits him and the first thing he does is goes to the dog track and make a bet. For example, in the first few episodes the owner of the casino Harry frequents, Freddy Lau, is killed, and there is evidence that places him at the scene. He didn’t do it but his commander officer, Alistair Winter (played by Steven Mackintosh), is looking for anything to kick his ass off the force so he takes to messing with evidence. What? I said he was a damn good cop, I didn’t say he was a good person. There is a beautifully shot scene in which Harry is about to interview the daughter of the casino owner Lily Anne Lau (Played by Jing Lusi), (she will become a reoccurring villain in series 2 but I will get to that when I get to it). This woman is delightfully evil, and knowing that Harry could get in trouble if it got out that he was at the casino the night her father was killed she basks in that knowledge. She does not stop that sinful smile throughout the whole scene. She leans in and just as she says it, the camera cuts out. Winter was watching the scene. It is revealed that someone had spilled coffee over the system that runs the cameras. What Luck!

Have you ever heard the story about the guy who found a lucky rabbits foot? He wins the lottery and his good fortune goes into the rabbit’s foot. Then he goes outside and gets it by a truck and his misfortune also goes into the rabbit’s foot. What’s my point? I don’t know but the bracelet must balance out somehow, right? This idea that bad luck will always follow good will become very important to ‘Lucky Man’, and will change the way the characters and the viewers see the bracelet and its purpose.  It is the idea that the more you use the bracelet, the more those around you will suffer. It is age old tale of Ying and Yang. There has to be a balance.  So, where does all that bad luck go? The Bracelet doesn’t want to hurt you so, who can it hurt? I’m getting ahead of myself, it’s safe to say that the previous owners of the Lucky Bracelet have never viewed it as a blessing. ‘Lucky Man: The Bracelet Chronicles’, a series of animated shorts that told the story of the bracelet’, explained that clearly.

Oh, my god, the main villain for the first series sucked. I’m sorry, I love this show but Golding didn’t leave any lasting impression on me. He was never that menacing. I mean yeah he poured gas over a guy and had him run down a London main street and when police tazed him, he caught on fire, but I never thought much of Golding. The most he did was get Harry’s brother thrown into prison and that was it. He was built up to be this giant menace, this dangerous mastermind, but in the end he basically boiled down to, ‘I saw that bracelet first! I want it! It’s mine!”. God, he sucked so hard. Thank god for series 2 villain. Compared to her, he was nothing.

Personally, I believed that Lily Anne Lau would have made a much better series 1 villain. She is so delightfully evil and she takes so much pleasure in outsmarting everyone. She was smart and calculated, I thought when she was introduced that she was going to be the main villain, instead we got Cry Baby Golding. You want a criminal master mind, who is running a criminal empire, Lily Anne Lau. Someone we know that get infiltrate the police squad and get to Clayton and his colleagues, even plan evidence and land an important person in prison, Lily Anne Lau. Want someone who can go around killing witnesses and don’t need hired goons to take care her dirty work? Lily Anne Lau.  A true psychopath. A better villain and she doesn’t even know about the Bracelet.

Stan Lee’s Lucky Man was a good solid origin story for me. While the villain was not that impressive, he was okay before his big reveal. Harry Clayton has all the clear stamps of a Marvel hero, a man who is deeply and truly flawed, who is given this gift and it forces him to realise that life is not a gamble, and you might not be lucky all the time. So, if you like what you read, because I left out a lot, I only concentrated on the overarching story,  and concentrated on some of the characters but there are a lot more. Go and check out Stan Lee’s Lucky Man on Sky One or Now TV or I don’t know Maybe Netflix if they let it. I don’t think they will, I mean they have Now TV. That’s a streaming service, right?

I will be back with a very in depth look at Stan Lee’s Lucky Man Series 2, when the show really takes off.