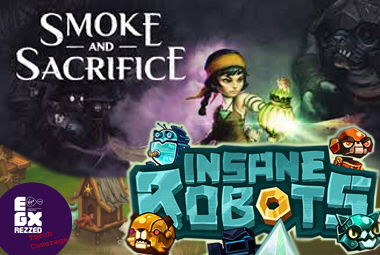 Smoke and Sacrifice
Developed by Solar Sail Ltd for PC (Steam), PS4, XBox One, and Switch,
Published by Curve Digital,

These games have nothing in common. They where just the last two (not counting the two final pairings including the recorded interviews that will be out later) that where left for extended articles. So let’s just cut to the chase. 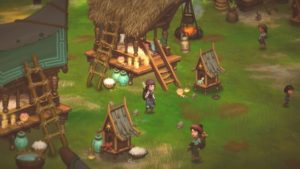 Smoke and Sacrifice is a 2D survival game of the ilk of games like Don’t Starve. It has the 2D drawn cut-out aesthetic and a big list of crafting recipes. But one big difference is a story. Don’t Starve did have a story but it was like Minecraft, it was very much in the background that you could do if you wanted. Smoke and Sacrifice has you do the story as part of surviving, making it part of the player progression.

The story is your quest to find your lost son who was ‘sacrificed’ to a rather gun looking idol to a Sun god in a world that’s twisted and deformed. It’s a story that gives enough drive to progress but it does start rather abruptly. You start in a field. Then you go home and find your baby son. Then you head off to the temple for an ‘event’. Then he’s sacrificed. Then comes the most jarring bit in a inter-title saying ‘many years later’. That’s where the game start proper as something happens that breaks the balance of the world and you ‘sacrifice’ yourself to the machine to flee, ending up in a new world, (spoiler: the machine is just a teleporter).

The start happens so quickly and that’s not even the tutorial section, which comes after you enter the new world. It would be better having the time in the first world last longer by having the tutorial there. The world of the game is twisted and warped so it would be nice to have an introduction but your just thrown in and left to your own devices. It’s the same thing as Don’t Starve but the key difference is the depth of the story.

In Don’t Starve, your left to your own devices with little plot or introduction. Everything is new and odd and the only way you find out about something is either eating it or being killed by it. In Smoke and Sacrifice there’s a plot, a tutorial, a half explanation to the weirdness of the world. But it comes at such weird times that you may already know how to use it before it’s tutorialised.

I want to play the game more and I can say now that I’ll most likely love it. But that start is just an odd combination of the game disinterestedly saying hello at some points and then just flicking through pages at others. Once I was past that it was great so once you get past that it’s a very good game in a very in-depth style. 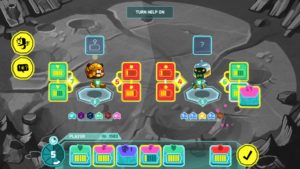 Insane Robots is a totally different game, a turn based card game. I ended up talking to the developer for quite some time and came back on the last day. This is a game that’s amazing in it’s simplicity. There is a story but it’s the kind of story that’s just a tutorial for competitive play. And as a good note on that; it’s two player competitive, single controller competitive, and online competitive so it’s covered on all bases for all systems which is sometimes rare. A lot of games are built for one competitive system for one platform primarily. This you can play on a PC or console and still not lose any of the experience. It’s a rare multiplayer breed.

The gameplay itself is simple. You are a robot, you opponent is a robot, and the aim is to destroy them while not being destroyed yourself. You have a defence circuit and an attack circuit that consists of two cards. Place two card for defence gives you a shield, two for attack gives attack power. Each individual card can have a maximum power of five so can have a max shield and attack of ten (5+5). But it has to be two cards to complete the circuit, so you’ll only have that power when you’ve placed two cards. Until then you have nothing.

That by itself is game but there’s other types of cards including glitch cards (adds power to you or takes from the enemy), hack cards (that could give or take from both depending how it’s used), and regular attack cards (that just hit life points instantly). There’s also ‘uber’ versions of those card that are just super versions with the same effect but hit more places, and power cards that are one off use rare cards that add to your attack or defence in a variety of ways.

The total token deck ‘size’ is 22 (each match pulls from them randomly) so it’s really simple to understand and pick up, (even though my explanation many not of been the best without the above visual aid). But it can get really complex.

The best example of that is from talking to the developer over the last two days of EGX, who ended up making his own personal competition. He demoed the game to a lot of people and press and won all the matches. By the end of the day that had expanded to him and the booth assistances never losing a match. When day two came around, it was a point of pride and so birthed the ‘can you beat the dev’ challenge. One or two of the booth hands ended up losing a few matches by the end of day three but the dev never lost. Was even around when a guy came back just to have another shot at the challenge.

It’s a testament to how easy the game is to pick up that even the booth hands managed to learn the tricks to success and even then it was still possible to beat them. That’s before going in to the hardcore modes and challenges the game has but this article is long enough as it is. I’ll end by saying that Insane Robots is great. Simply challenging and complexly simple.

Both of these games are worth playing. Think that’s how these games can end up being paired together. They’re both great.