Styx, as a franchise is an interesting beast, being a mixture of some of the modern and more complex game styles. The leading part is the ‘Thief’ style stealth and stealing mechanics. The other is more prominent in its latest outing, Shards of Darkness. That is the sandbox style open world were everything presents a different path and a different solution.

Shards of Darkness is definitely the kind of sequel that is built on the foundations of it’s previous titles from what was shown in a live demo with the developers. The maps retain their large scale with it’s verticality. The agility of Styx also remains with the camera controls that are needed fro a game like this.

What has been expanded is the interactive nature of the levels, adding to the sense of a live, living world. There is hope that this remains throughout all the levels as we were only show one level.

A big aspect of what we were show was the use of Amber and the crafting system. Being able to steal craftables within the level means that you can have choice in how you want to tackle a problem. Combined with the RPG unlock system, players have a lot of choice on how they move through levels and complete objectives.

Being heavy built on Master of Shadows, old fans will be very happy. But with the enhanced open world, new players won’t be lost. 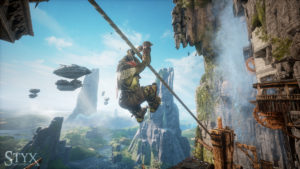 “Following its positive reception from press and players,the centuries-old goblin assassin Styx returns in a new stealth game,Styx: Shards of Darkness, with a bigger budget, bigger ideas, and a new engine: Unreal Engine 4. Master of Shadows was a valiant exploration into the world of the green goblin thief, but Shards of Darkness will delve deeper into a complex narrative and fully realized world.

Shards of Darkness aims to offer unparalleled freedom of movement, along with refined stealth and assassination mechanics, expanding and improving on the strengths of Styx: Master of Shadows.”