Remember Frosty? Do you remember the song?
‘Frosty the snowman, was a jolly happy soul, with a corn cob pipe and a button noses and two eyes made out of coal.’

Yeah, the happy chappy who came to life when two kids put a magic top hat on his head. Delightful isn’t he? It never crosses your mind that he is a sentient snowman walking around when you’re young, you just think its magical, part of Christmas, part of the winter. At least I did. That was until two movies ruined that for me.
Before you start, I am well aware that Frosty the snowman and the two other snowmen are nothing alike.  Magic did bring Frosty to life. He is just like the Snowman from the British short story ‘The Snowman’.  Oh, a recommendation. If you haven’t seen ‘The Snowman’ yet I highly suggest you see it, it is a beautiful story, with one of the most remarkable songs I have ever heard. In 2012, a sequel was released called ‘The Snowman and the Snowdog’. Go and watch them!
Anyway, what ruined Frosty and snowmen for me in general were two movies, they were both called Jack Frost. The first is a 1998 ‘family’, and I use to the term lightly, film about a father coming back from the dead as a snowman to visit his son. And he looks like this 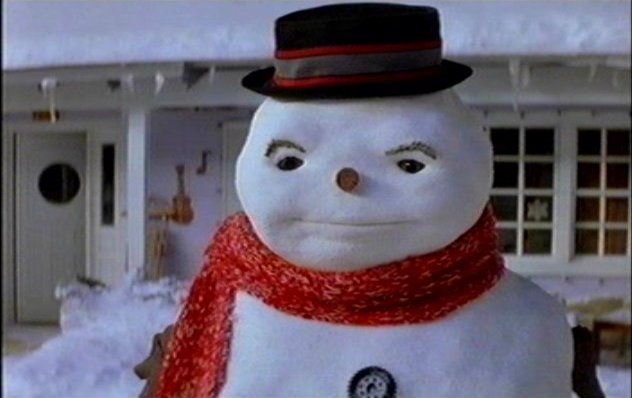 Nightmare fuel isn’t it? That is called the Uncanny Valley, it looks like something we can recognize as a face but it is creepy and makes you feel uneasy. A lot like this… Creepy isn’t it?

Another contender is a Serial Killer called Jack Frost, he is from the 1997 horror film of the same name. Once again a man inhabits the body of a snowman, except he wasn’t a father visiting his son and the snowman wasn’t made by some local kids. He’s a serial killer who was hit by a toxic chemical truck. The toxic waste mutates him, fusing his atoms to snow; he makes himself into a snowman. A sentient snow man, who is actually a mutated serial killer, doesn’t that feel like Christmas?

While the 1998 Jack Frost did give me nightmares as a kid, it was a harmless film that I‘ve come to enjoy in my older years, but the 1997 Jack Frost, that made me a little weary of snowmen until I was old enough to know better. I have to admit, I have a soft spot for the horror movie and its sequel and I try my best to watch it every year around the holidays. It’s just so cheesy and so bad that it’s good. It’s one of those movies you can sit down with a couple of friends and make a drinking game of how many snow, Christmas and ice puns Jack can come up with. I recommend it if you like seeing really bad horror movies.

One thought on “Frosty the Snowman, Jack Frost and the Serial Killer”

Have A Scary Christmas: Santa Claus

Have a Scary Christmas: Gremlins

Have A Scary Christmas: Lovecraft and Solstice

Have A Scary Christmas: Krampus