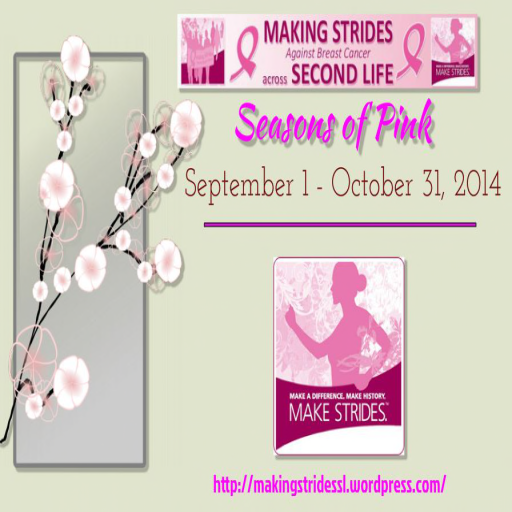 The 2014 Making Strides Against Breast Cancer Across Second Life season will begin on September 1, 2014 and will continue until October 31, 2014. On Sunday, September 7, 2014 at 10am slt, the Making Strides Kickoff Celebration events will be held.

The theme for the 2014 Making Strides Against Breast Cancer Across Second Life is “Seasons of Pink”.

The 2014 Making Strides Committee is led by Jessii2009 Warrhol, Chair and Gem Sunkiller, Co-Chair. Visit the following link for a complete committee list:http://makingstridessl.wordpress.com/about-making-strides/organizers/

Please contact Jessii2009 Warrhol or Gem Sunkiller in Second Life if you would like to get involved with the 2014 Making Strides Against Breast Cancer season in Second Life.

Breast cancer is the most common cancer among women in the United States, other than skin cancer. It is the second leading cause of cancer death in women, after lung cancer.

The American Cancer Society estimates for breast cancer in men in the United States for 2014 are:

About Making Strides Against Breast Cancer:

Making Strides Against Breast Cancer or MSABC is the largest network of breast cancer awareness events in the nation, uniting more than 300 communities to finish the fight. Every breast cancer walk and event is an incredible and inspiring opportunity to honor those who have battled breast cancer, raise awareness about what we can do to reduce our breast cancer risk, and race money to help the American Cancer Society fight the disease with research, information, services, and access to mammograms for women who need them.

About The American Cancer Society:

For more than 100 years, the American Cancer Society (ACS) has worked relentlessly to save lives and create a world with less cancer and more birthdays. Together with millions of our supporters worldwide, we help people stay well, help people get well, find cures, and fight back against cancer.

For more information please visit the sites below: